Frank Morrone is an award winning re-recording mixer who has worked extensively in both film and television. He has received seven Primetime Emmy nominations with two wins as well as multiple CAS, Golden Reel and Gemini nominations. His award winning work includes Best Sound Mixing Emmys for the ABC hit LOST and mini-series The Kennedys as well as a Best Sound Satellite award for Tim Burton's Sleepy Hollow.

Frank is a musician and his interest in recording was sparked when he purchased a Teac 4-track to record his band. One of his recordings led to an opportunity to work in a studio. He began his career mixing music for film scores as well as jazz, rock and country albums.

From there, he transitioned to film and television post production editing music and dialogue and finally onto re-recording. In 1995, he accepted a position at Todd AO New York, where he also lectured for NYU film school. He moved to Los Angeles in 2004 to work with JJ Abrams on LOST and has since mixed projects for Technicolor, Sony and Disney as well as freelance projects for several other studios.

He is a member of the Foreign Language Film Committee for The Academy and has also served on many Blue Ribbon judging panels for various international festivals including Vaughan Film Festival, Rome 48 Hour Film Project and Jackson Hole Wildlife Festival. He has given the Graduation Keynote speech at Musicians Institute. 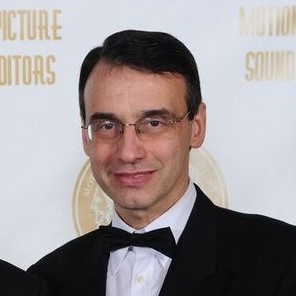